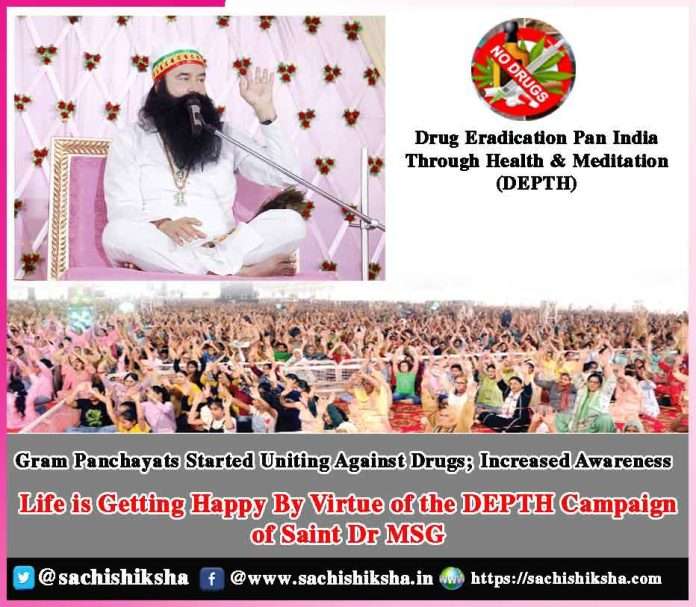 The DEPTH Campaign (Drug Eradication Pan India Through Health and Meditation) being run by Dera Sacha Sauda against drugs has started showing wide impact. In many states including Haryana, Punjab and Rajasthan, people are coming forward to save their children from the drug menace. Recently lakhs of people have turned away from this evil by joining this campaign being run by Revered Saint Dr. Gurmeet Ram Rahim Singh Ji Insan of Dera Sacha Sauda, while many youths have also come forward who were addicted to drugs like charas, heroin. They have openly appreciated the efforts of Dera Sacha Sauda.

Not only this, the favorable effect of the DEPTH Campaign is also being seen at the village and panchayat level. Dozens of newly elected panchayats in Haryana have taken a pledge to make their villages drug free as per the DEPTH Campaign and have shown commitment to work unitedly to curb the effects of drugs. It is worth mentioning that during the 40-day stay of Revered Guru Ji in Uttar Pradesh, hundreds of Gram Panchayats had pledged to save the youth from this evil of intoxication at the village level for which work has also started at the ground level.

It is said that any society can become prosperous only when its young generation is healthy and beautiful. This healthiness and beauty should be reflected not only in the body but also in the thoughts. This power of youth determines the future of the country. Just as the structure, colour, form, fruit etc. of the whole plant or tree are contained in a seed, in the same way the young generation is the seed of the society. If the seed is good and it is planted and nurtured well, only then it becomes a fruitful tree. Similarly, if our young generation grows up in a good environment, we can be successful in building a prosperous and happy nation.

In India, which gives the mantra of unity despite differences in geographical conditions, nowadays drug addiction is being heard, read and seen as a dreaded disease. This can be said to be a severe attack on the prosperity and social system of the country. It is not an exaggeration to call it an indirect war to weaken the youth power of the country, because the consequences of this increasing addiction among the youth are proving to be very dangerous and harmful.

The situation has reached to such an extent that in hotels, clubs, parks, squares and public places, youths will be found indulging in drugs, which is a matter of concern. Drug addiction is not only a matter of law and order, but it also affects the education system, living conditions, family environment, upbringing of children and other entertainment facilities. Poison is being dissolved in the veins of our younger generation through wine, cigarette, cannabis, heroin, tobacco & white drug. According to a survey, about 45 percent of the youth of the country is addicted to drugs.

Newly elected Gram Panchayats in Haryana state have also started extending their contribution towards the DEPTH Campaign started by Revered Guru Saint Dr. Gurmeet Ram Rahim Singh Ji Insan. Gagandeep Kaur, the newly elected Sarpanch of Mattadadu village of block Darewala, district Sirsa, Haryana, along with her entire gram panchayat, took a pledge to make the village drug free in the swearing-in ceremony. Not only this, she also said that if a person is found selling drugs and intoxicating in the village, then the Gram Panchayat will not go to the police station to release him, nor will any villager take his bail. Sarpanch representative Randeep Singh Mattadadu told that through Online Gurukul, he had face to face conversation with the Revered Guru Ji and talked about stopping the growing drug addiction in the village. 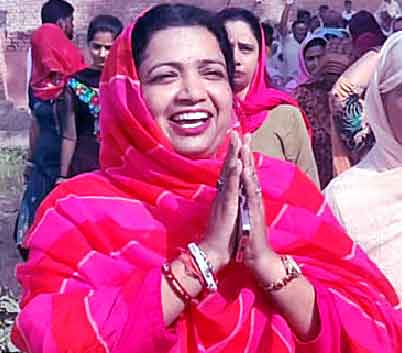 “It is a matter of great sadness that our youth are getting ruined due to drugs. Therefore, work will be done to keep the youth of the village healthy. No villager should come to the Gram Panchayat to help the drug peddlers and addicts. I have not become a Sarpanch, but the entire village has become the Sarpanch, so we will try to make the village a model village of the whole country.” – Gagandeep, Sarpanch, Village Mahdadu

Panchayats of many villages had also come together that day. Acting on the same, we have banned the sale of drugs in the village during the swearing-in ceremony of the Gram Panchayat. Along with this, a resolution has been taken by the villagers that the Gram Panchayat will not support drug peddlers and drug addicts.