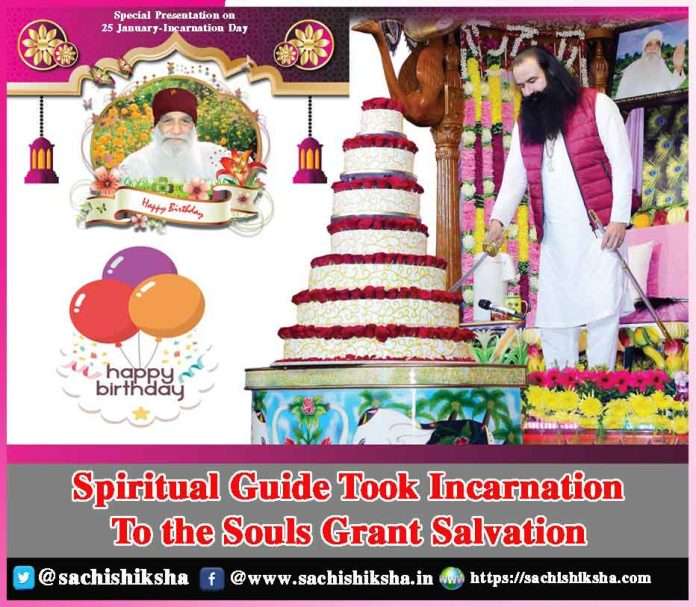 Main Objective of Spiritual Saints: Ever since the creation of living beings, true spiritual pir-fakirs, saints and great men also incarnate with the purpose of salvation of their souls and dedicate their whole life to the service of humanity. Of course, here they eat, drink, get up and sit and do all the work like common people, but their holy life is full of spirituality without worldly and sensual desires.

The difference between them and the common people is that they do not come to this material world like common people, but they are the divine form of the Supreme Father, the resident of the Eternal Abode, and incarnate on this earth for the salvation of souls. Saints continue to inspire people to become human beings by following the teachings of religions throughout their life. They make their valuable contribution in getting people rid of  the drugs, social evils, hypocrisy and bad practices spread in the society. In fact, a spiritual saint lives for human welfare and such a pious life belongs to the true Spiritual Guide Param Pita Shah Satnam Singh Ji Maharaj. His philanthropic life is a source of inspiration for the whole world. 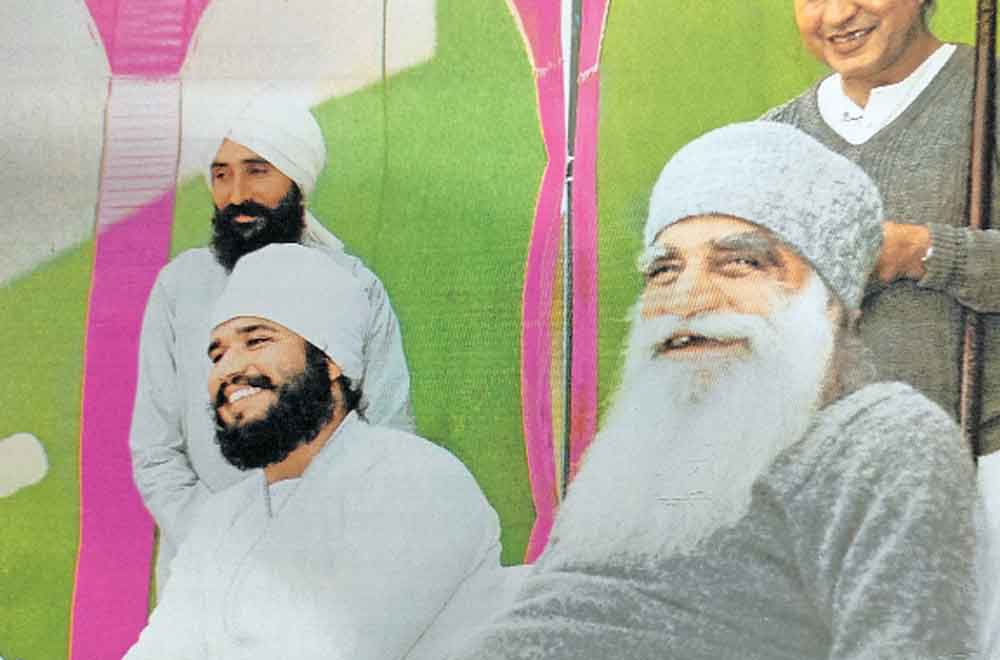 The most Revered Supreme Father God- Himself Shah Satnam Singh Ji Maharaj descended from the Eternal Abode. His revered father`s name was Sardar Variam Singh Ji  and  the revered mother’s name was Aas Kaur Ji. His Holiness hailed from the holy village Shri Jalalana Sahib, district Sirsa, Haryana.  His adorable father was  the owner of huge land & property. His adorable grandfather Sardar Heera Singh Ji Sidhu was the Zaildar of the village. His Holiness belonged to Sidhu dynasty.

In those days, a carefree & learned fakir happened to visit the village Shri Jalalana Sahib. He was a true saint who used to motivate people to worship God. The adorable parents invited him to their home & welcomed him from the core of their heart. He stayed in the village for a couple of days & during this period, he took the meals at the house of the adorable parents. The adorable mother herself would serve him the food. One day on having pleased, he proclaimed, “ Dear Devotees! Your devotion to worship God & sense of hospitality are supreme. Your supreme feeling for service  to humanity is accepted by God. Your desire of having a child will be fulfilled definitely by God Almighty. A Supreme Divine Soul will take birth at your home.”

By the extreme blessings of God & the best wishes of the fakir, after a long gap of 18 years, the much awaited wish of the adorable parents to have a child was finally fulfilled. The most Revered Param Pita Shah Satnam Singh Ji Maharaj incarnated on 25 January 1919. Adorable parents felt overwhelmed happiness. As soon as this holy message reached the villagers & relatives, there ran a wave of happiness. Every living being- be it a human being or a creature- filled with pleasure. The whole environment seemed to be singing sonorous tunes! The divine ecstasy prevailed everywhere.

On the holy incarnation of the adorable Spiritual Master, the royal family was congratulated by one & all. As per existing custom and tradition, platters full of jaggery, jaggery powder, home made local sweets & corns were distributed in the village. The poor bags were filled with grains & sweets. Every living being & every creature of the village thanked God Almighty for the holy incarnation of His Holiness. On hearing the holy news of the holy incarnation of the Revered Param Pita Ji, the fakir also reached in the village & extended his best wishes to the adorable parents. The fakir revealed the fact: ‘Dear Devotees! A Supreme Soul God-Himself has incarnated at your home. Treat Him with full affection. His Holiness ( The Revered Spiritual Master) will stay with you for forty years only and after that the task entrusted by God, the work of serving humanity & granting salvation to the souls for which His Holiness has incarnated, will go to the Perfect Spiritual Master who has sent His holiness as your child.’ 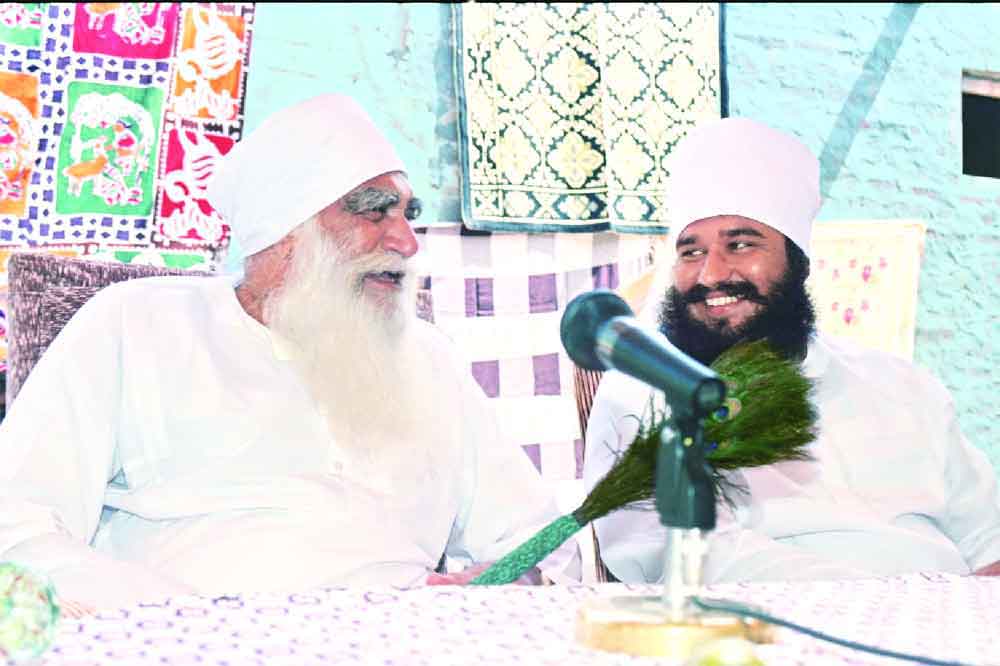 Since childhood, the face of His Holiness was extraordinarily radiant & magnetic. Whosoever watched, just kept watching. The divine radiant face didn`t let the eyes move to other direction. The water supplier who used to fill water in the house, when he was about to go back after filling the water one day, suddenly his eyes fell on the smiling face of the Revered Param Pita Ji lying in the cradle; he lost his consciousness & kept looking at the Revered Param Pita Ji without blinking his eyelids.

Suddenly the adorable mother looked at that water supplier, why is he looking at my Son like this. He may be having an evil intention. She ran & took her Son in her lap. Seeing this affection of the adorable mother towards her Son, the water supplier smiled & said, ‘Respected Mother, I was staring lovingly at your Son because I was having the glimpse of our spiritual leaders or revered incarnated personalities in His Holiness.’ Just then the adorable mother put a black mark on His forehead

His Holiness had been a unique personality since childhood. His childhood was full of sweetness. His practical knowledge was far more impressive than His age group companions.  His Holiness was still  at a young age when His adorable father left for the Eternal Abode. His Holiness was brought up by the adorable mother and adorable maternal uncle Sardar Veer Singh Ji.

His Holiness completed His education as a student of Government School, Mandi  Kalanwali. His Holiness always extended polite & sympathetic attitude towards His class mates & rendered possible help to the needy. Once one of His class mates  got fever in the school. His Holiness got  him medicine from the doctor & dropped him at his home after sitting him  on His own cycle. Everyone was familiar with Your sense sympathy towards others.

Help in the Marriage of a Poor Girl:

After studies, His holiness started taking interest in farming.  His Holiness showered His grace not only on human beings but also on living beings. His Holiness didn`t remove any animal grazing in His own fields. Rather, even in His presence, if an animal entered the fields & was grazing the crop, His Holiness would never take it out.  Every day a buffalo would come & start grazing the crop of gram.

His Holiness would never remove it from there. The buffalo used to fill its stomach & sit beside His Holiness. This complaint was made to the adorable mother. Next day His Holiness patting the back of that buffalo said, “ Dear Devotee! Now somebody has complained. Therefore, don`t graze the crop standing in one field, rather graze the crop while moving in different fields.” And all the villagers are a witness to the fact that after that day no one had seen that buffalo standing in a field & grazing the crop. In this way, there are lots of such examples of benevolence extended by the the Revered Param Pita Ji.

All worries are vanished”

and think about the Voice of God that removes all tensions & griefs.

Yet Another Arduous Test, Order to Demolish the Mansion-like House:

Blessing of the Spiritual Succession:

As per holy orders of the Revered Sai Ji, His Holiness was profusely decorated from top to toe with garlands of currency notes on February 28, 1960. His Holiness sat on a jeep & led a royal procession throughout the city of Sirsa. Thousands of the devotees of Dera Sacha Sauda participated in this procession. Every body was astonished to witness the splendid occasion & came to know that Sardar Harbans Singh Ji of Shri Jalalana Sahib has been declared as the Spiritual Successor to Revered Shah Mastana Ji Maharaj.

“ From today onwards, We have granted Sardar Satnam Singh Ji ( Revered Param Pita Shah Satnam  Singh Ji Maharaj ) Our Own Form. This is the same Satnam whose holy name the people of the world kept reciting throughout their lives. By holy orders of the Revered Sawan Shah Sai Ji, We have brought Shah Satnam Ji from the abodes above & placed His Holiness before all of you. Whosoever chances to have His Vision even from the back will not go to the Hell. His Holiness will save him by virtue of His benevolence.”

As the Second Spiritual Master of Dera Sacha Sauda:

The followers who used to be in hundreds increased to thousands to lacs. By showering His great benevolence, His Holiness conducted thousands of spiritual congregations in the states of Haryana, Punjab, Rajasthan, U.P. etc. Today, the benevolence & the holy teachings of His Holiness is the topic of discussion in every house. His Holiness motivated more than 11 lac people to shun evil habits & blessed with the God`s Words thereby making them capable of having God`s vision. His Holiness composed hundreds of spiritual songs in a very simple language. Today, these hymns are the source of inspiration for the people to follow the holy teachings taught by His Holiness.

Not only the class mates but also the whole staff members were impressed by His welfare & humanitarian passion. It is generally seen that many people rebuke any needy who comes to their door & don`t offer water but His Holiness didn`t remove any animal grazing in His own fields. Rather, even in His presence, if an animal entered the fields & was grazing the crop, His Holiness would never take it out.

In this way, there are lots of such examples of benevolence extended by the the Revered Param Pita Ji. When His Holiness grew up, the scope of welfare activities extended. His Holiness would participate actively in the public welfare works of the village. His Holiness was always on the fore front to extend His contribution towards humanitarian welfare works. His Holiness got the construction work of Shri Gurudwara Sahib of the village completed while extending maximum help. Being the dignitary of the village Shri  Jalalana   Sahib, every public work was got done by His advice & direction.

Sachi Shiksha - 2 weeks ago 0
Rome Was Not Built In a Day Introduction: The English author John Heywood's concluded that "Rome wasn't built in a day, yet they were laying...

Sachi Shiksha - 2 weeks ago 0
Dera Sacha Sauda, an organization known for confluence of all religions, delivered a great and unique massage of worldwide awareness for the utilization of...