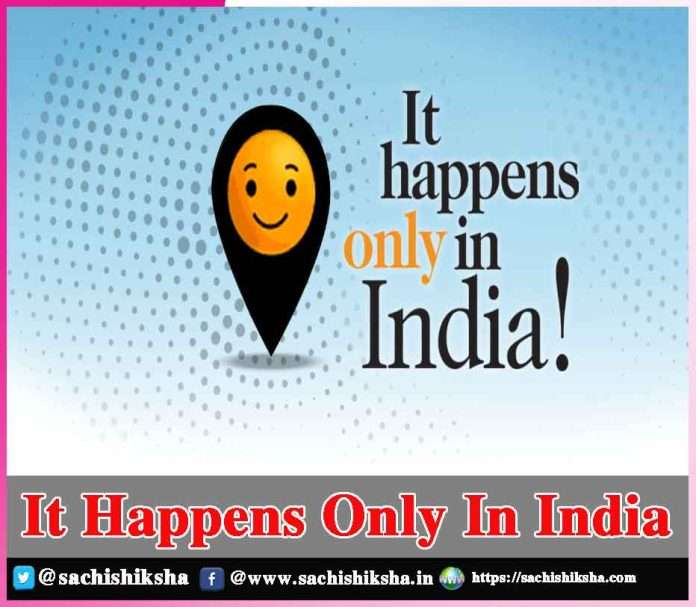 It Happens Only In India

We owe a tremendous applaud to the Indians for teaching the world about calculations which is essential for scientific advancement -Einstein Albert.

Introduction: Several matters are unique to India and occur here mostly. Whether good or bad, those are the factors that make India what it is. Despite all of the man-made turmoil, nature has blessed India with a wide variety of tourist destinations ranging from mountains, plains, deserts, and beaches.

Because each state has its own distinct style, one can have the best shopping experiences in India. Four specific seasons, multiple cultures, outlooks, diverse religious beliefs are what define and describe us. Overall, India has a vast complexities and range of living, but what we see on a daily basis is the authentic India. 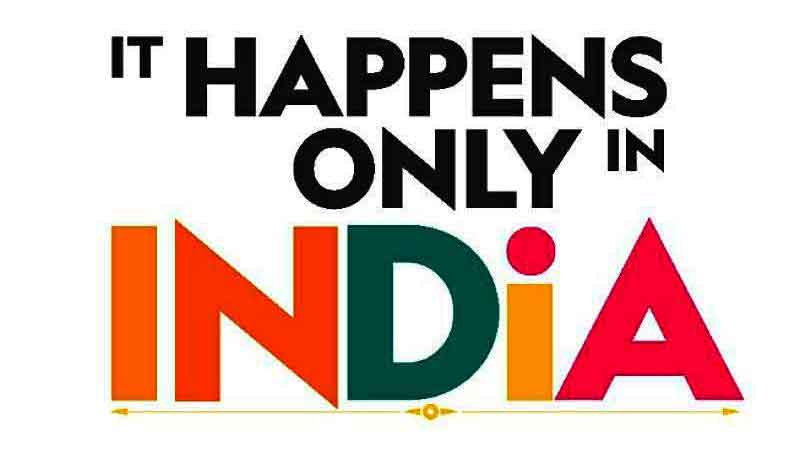 Aside from architectural masterpieces, historic sites, and content treasures, intellectual achievements, scientific inventions, and breakthroughs are all part of cultural roots. In the Indian context, the accomplishments of Baudhayana, Aryabhatta, and Bhaskaracharya in mathematical concepts, astronomy, and astrology; Varahmihir in physics; Nagarjuna in chemistry; Susruta and Charak in medicine; and Patanjali in yoga are artifacts of Indian history and culture. Civilization can shift, but our legacy does not.

The ancient traditions of Egypt, Greece, Rome, and others were devastated by time, leaving only their ruins. However, Indian culture is still thriving. Its basic values are the same as they were in antiquity and unique in behaviour.  There are village panchayat, a social hierarchy, and joint families concept which is a learning and diversity lesson for  the entire world. The precepts of Buddha, Mahavira, and Lord Krishna are still present today and act as a source of encouragement in India.

When individuals are asked about India, the first thing that springs to mind is its diversification, which is exclusive to the country and only occurs there. There is no scarcity of wide range with 29 states, each with a unique language, celebrations, civilizations, and customs. And, contrary to popular belief, while these distinctions can easily cause schisms, this has very seldom been the situation. For thousands of years, Indians have frequently applauded various cultures, regardless of where they originally came.

This has been made possible by India’s age-old vision, Vasudhaiva Kutumbakam, which states that “the universe is one family.” It is a Sanskrit phrase that signifies the entire earth as one family. Vasudha, Eva, and Kutumbakam are three Sanskrit words that together make up the first word. Vasudha denotes the earth, Eva denotes emphasis, and Kutumbakam denotes a family.

Vasudhaiva Kutumbakam culture must be fostered at all levels and across the world from our social experiences to behaviour between religious communities and beyond. In an era when religious and cultural conflict dominates the news, India is showing examples to exemplify the kind of culture which is diversified. Our dignity is in our cultural and traditional diversity. India and its citizen are like garden with a wide range of flowers, fragrances, colors, and ornamentation is gorgeous and adds spirituality to the garden. Similarly, our civilization is a beautiful synthesis of different languages, customs, and ways of life.

The family is the most widespread and long lasting institution. We discovered some form of family in each and every culture and at each level of development. As a result, we discovered various types of families from all over the world. However, in India, we discovered a unique family system that deserves special attention. In India, a family includes  not only husband, wife and their children,but also grandparents, uncles, aunts, cousins, and grand children. This is known as the family system or extended family system. This joint family system is a unique feature of Indian socialization.

Members are all obligated by mutual obligations and share a common ancestor. Despite varied changes, the joint family structure still exists in modern times. Of course, the system is broken in urban centers, but it still exists in remote regions of India with uniqueness.   It has stood the test of time in Indian society, and this practice is unique to India and is rarely encountered in other countries around the world.

Atithi Devo Bhava is a Sanskrit verse, basically it means “The guest is similar to Divine”. It is based on ancient Hindu scripture and has become a part of Hindu current societal code of conduct only seen in India. What it has come to imply today is that no matter whom you are or from where you come from, you are greeted warmly and treated with dignity in India. It personifies the Indian people’s kindness and compassion in which everyone is welcome to take in the country’s elegance and the delectable flavours of its meals. It is an important part of Indian culture to regard every guest as if they are Divine.

This one-of-a-kind ‘code of conduct,’ outlined in the primitive Hindi scriptures known as the ‘Taittiriya Upanishad,’ affirms our culture’s value systems and legacy, and guarantees that no guest feels mistreated.

Festivals such as Eid and Christmas are applauded with a context of togetherness among Hindus, Muslims, Christians, Sikhs, and others throughout India. On these festival days, it is common to see individuals sending and receiving festive food products. In India, this represents communal harmony.

Aside from these major festivals, the country’s innumerable tribes enjoy large numbers of festivals, each one is unique in itself. These festivals are observed with zeal, from recognizing their divinities to honoring elements of nature and idolizing animals too.

Conclusion: Positive and negative aspects are inherent in every society, but we should work on maintaining and strengthening our positives. India is a melting pot of heritage, value systems, preconceptions, ideologies, blind faith, and other things. However, it is our country, and we should be proud of Indians.