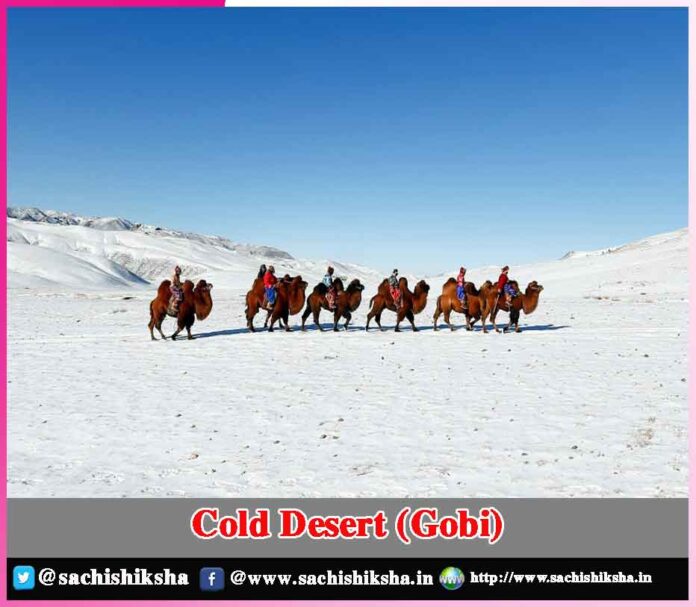 Cold Desert (Gobi) Gobi Desert has been an iconic example of remoteness. In 1298, Marco Polo described it as the ‘desert of death’.

He said this desert was named by French cartographer Lisle as the ‘Gobee’ in 1706. Before that, the area beyond the Great Wall was simply known as ‘Terra Nullius’, a place devoid of identifying features and harbouring ‘barbarians to the north’.

Gobi is one of the world’s highest and driest deserts.

It is the fifth largest desert in the world and largest in Asia covering a great part of Mongolia and northern China. The name ‘Gobi’ comes from the Mongolian word ‘Govi’ for a dry landscape with characteristic arid vegetation including palatable forage species and rare medicinal plants. In literal meaning, Gobi means a ‘waterless place’.

It occupies a vast arc of land

The landscape is as varied as it can be:

canyons filled with ice, dinosaur fossils, rocky terrain and sand dunes. The desert has come to be because the Himalayas block the rain-laden clouds coming in from the Indian Ocean. It is a cold desert predominated with bare rocks, frost and occasional snow on its dunes.

Gobi is unusual as it is a cold desert 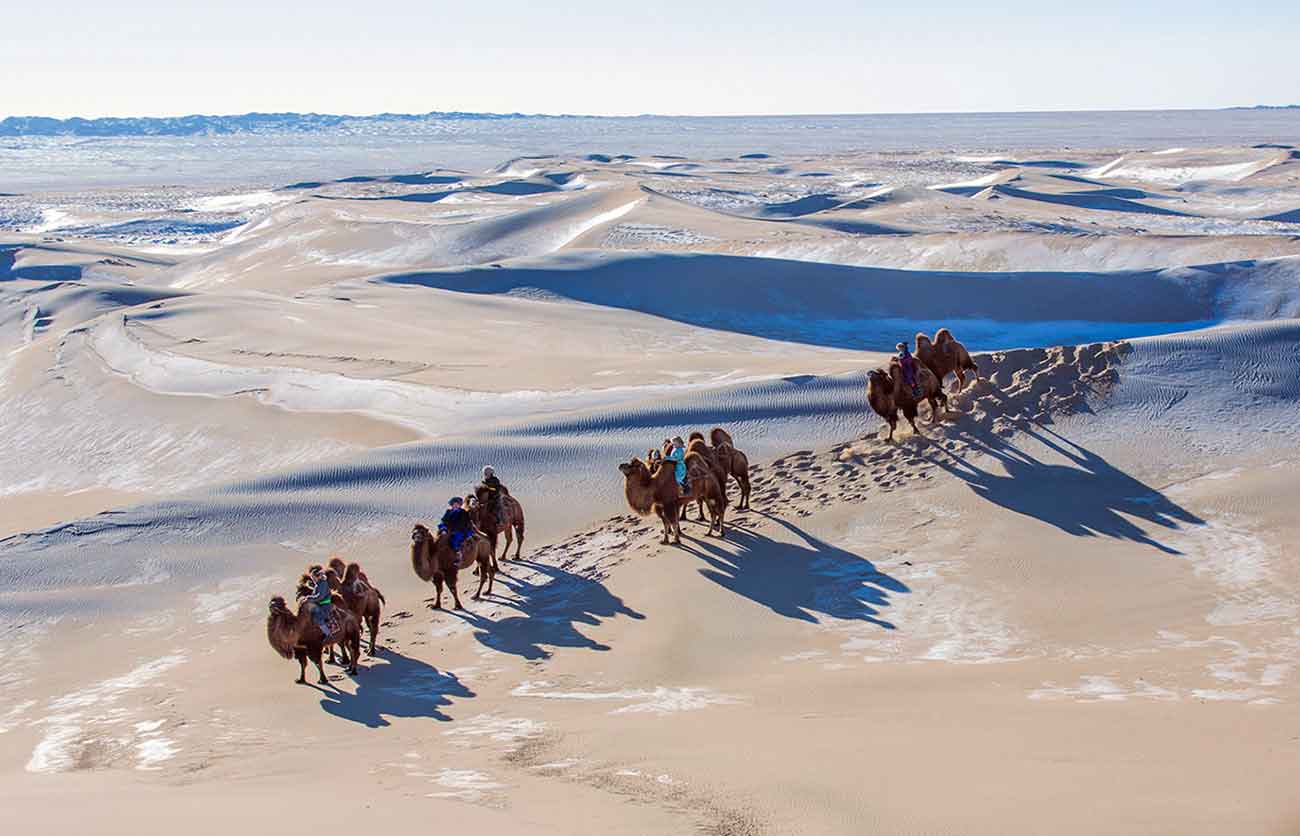 (with temperatures as low as −40oC), in which extreme winters and drought create a harsh environment for people following a traditional agro-pastoral way of life. Cold deserts have hot summers but extremely cold winters. These deserts are found in high plateaus or mountainous areas in temperate regions of the world.

It is the second most important palaeontology site in the world. Many important fossils have been found here, the most memorable of which include the discovery of the first dinosaur eggs in Flaming Cliffs in 1923. It is a beautiful area which abounds in dinosaur fossils.

near the city Dunhuang in Gansu province was designated a UNESCO World Heritage Site. This is a series of Buddhist cave temples dating from 4th to 10th century housing important historical paintings.

is the brightest with countless stars and cloudless blue daytime. It is a wonderful area for stargazing. There are mountains with lush green valleys, random sand dunes, oases, rivers, lakes, historical sites, vast barren steppes, grassy steppes and mud cliffs.

is a mix of true desert, desert grasslands and steppe. Despite the climate, the Mongolian portion of Gobi desert supports globally-significant wild lands and wildlife, and is a part of the largest steppe ecosystem in the world that supports its historic wildlife assemblage, including long distance wildlife migrations.

Some Gobi desert steppes are barren

while others have vegetation, mainly wild leek, which grow high and flower well during monsoons. During this time, Gobi desert turns into a green land with barren steppes turning into flower steppes. There are also some herb meadows, Mongolian onions and herb salt marshes here.

It is home to many different animals

Gobi desert is not only pictures que, it is rich in natural resources

such as copper, gold, crude oil and coal deposits. Oyu Tolgoi is the world’s third largest copper and gold mine while Tavan Tolgoi is ranked 10th in the world by its coal resource.

Parts of the Mongolian Gobi desert region have been identified as among the world’s largest and most intact(least converted) remaining wild areas. The soil is chiefly carbonaceous (rich in carbon), contains gypsum and gravel. The desert’s drainage is largely underground and surface rivers have little constant flow.

is small with one person per square km. They are mostly Mongols with some Han Chinese. The predominant livelihoods in marginal drylands are nomadic cattle & livestock raising and farming. However, they face an unforgiving natural environment with extreme winters, drought, storms and dust regularly challenging the lives of people dependent on land.

at an alarming rate of 3,600 sq km mainly due to human activities such as deforestation, overgrazing, depletion of water resources along with climate change. Wild animals are losing their habitat and vegetation type is decreasing.

A possibly more urgent threat to wildlife and biodiversity

is the cumulative impacts of rapid growth of mining and related infrastructure. Though the direct impacts of mining on land and water are significant and can reach far beyond the mine site, perhaps the most urgent threat to wildlife is created by transportation, infrastructure and traffic to support mining operations that creates barriers to movement.

of coping with extreme climate events, limited support and a modern society are changing the role, but not the relevance, of herding livelihoods. Gobi desert embodies the risks faced by marginal environments in their exposure to climate events.

that the ability to protect against hazards exists as a combination of integrating natural resilience with adequate preparation and response by residents and governments. Balancing climate hazard impact on communities, policy decisions and mining will challenge and reshape the Gobi for years to come.

In spite of difficult conditions the nomads have to battle for survival, they are known for their hospitality to visitors that come to their area.

Hey There Was a Tree